The people providing political commentary on US TV are extraordinarily wealthy. As far as I can tell, they're all in the top tax bracket.

As a result, their opinions are necessarily coloured by that fact. Even the honest ones (a list which appears to be quite short) will give you the news filtered through the lens of its impact on them. So you cannot easily get much useful information about its impact on you. And many of them (I'm looking especially at some people on Fox News and CNBC) will lie right to camera if they think it will make them better off.

Their alarmism makes people make bad decisions. Instead of debunking the bad decisions they've caused, these parasites will encourage them. The lesson is threefold:

There's a major case in point on income tax. And it's not just the cable news and finance guys that you have to watch out for - networks and the newspapers are doing it too.

They're exploiting dumb people. They want you to be dumb too.

Specifically, one thing that's got me cranky is the way the media has been playing up stories about people trying to earn less than $250,000 in order to pay less tax (as discussed in several of the links). Instead of doing the responsible thing - explain the actual situation - they're encouraging you to misunderstand.

Most of my readers are very smart, so I'm probably stating the obvious, but let's look at what's going on.

This happens by there being progressively higher tax rates on the amount you earn above particular threshholds, creating what are called "tax brackets"

In the US in 2008, the top marginal tax rate (the amount you pay on your last dollar) was 35%. But the average tax rate for everybody is below that. What's happening is that the two highest marginal tax rates for those with the highest incomes in the US will in 2010 go ... back to what the highest two marginal rates were in 2000. That's all.

The total (or average) tax rates for 2008 look like this (public domain image by Dejo): 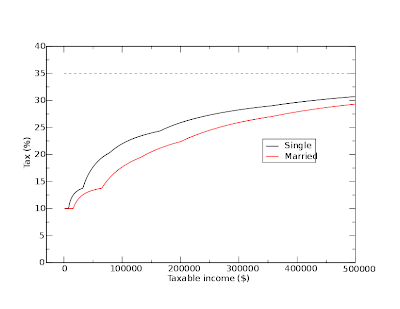 What's happening is that in 2010, the green line will move up a bit, but in fact most people in the US will actually pay a little less tax - the red and black lines will only be higher up the right hand end - and most people are quite a way left of the middle of the graph).

Guess what? I already pay more than 39.6%. My marginal tax rate here in Australia is 40% (and it's recently gone down - I was paying 42%). If I was earning my current income in the US, I'd be paying 25%, not 40%. I pay a higher marginal rate of tax than every Rick Santelli in the US. Actually, if you include the way some of the government benefits reduce with income (something I strongly support), my effective marginal tax rate (impact of the last dollar I earn) is actually a fair bit higher than 40%.

I experience very little disincentive to earn an extra dollar of income, even though I am paying a higher marginal rate of tax than everybody in the US will be paying, even after the tax changes come in. (The biggest disincentive I experience is simply the marginal cost in time, a far more scarce resource to me than money.)

I don't feel like I pay "too much" tax. I drive on roads. My kids go to school. I get less expensive prescription drugs than I otherwise would. When I have to go to the doctor, I get most of the money back. There are police, fire brigade, ambulance services and a hundred other things that make it possible for me to earn that money I pay tax on, and make it possible for me to enjoy the benefits of the rest of it.

I also gain the security of knowing there are a couple of safety nets available if everything were to go pear-shaped. The fact that other people are getting the benefit of those safety nets right now is not a source of envy - if you're badly enough off that you need them, there's really not much to be envious of.

Here's something to keep in mind: if they'll lie to you about that, what else can't you trust them on?
Posted by Efrique at 10:03 AM

As to your last point: everything. When it comes to consuming media, the old X-Files adage comes in quite handy: Trust No One.

It's also part of the Troubleshooters credo in Paranoia:

Stay Alert. Trust No One. Keep Your Laser Handy.