Anyway, I grabbed the data from Lee and Wolpoff (2003) ("The pattern of evolution in Pleistocene human brain size", Paleobiology, 29(2), 2003, pp. 186–196), read it into R and looked at log brain size (since linear trend on the log scale corresponds to constant percentage growth). If there was a sudden jump in growth rate, it should show as a kink.

I then used the lowess function (which is a form of locally-linear regression) in R to smooth the data, to hopefully identify any such kinks and see where they fell. I used the default value of the smoothing parameter (f = 2/3). I then tried a range of other f-values, and all values between roughly 0.5 and 0.8 (a fairly wide range, so the conclusion is robust to the smoothing parameter) give very similar-looking fits, and a clear kink at the same x-value: 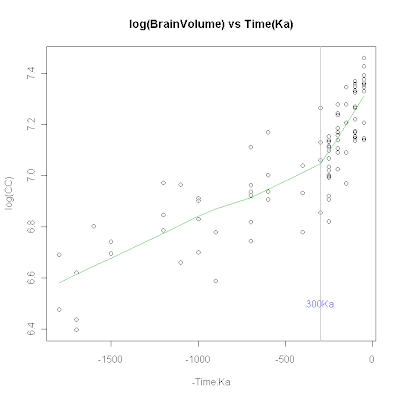 With this analysis, the kink plainly appears at 300 thousand years ago (but the ages of the observations are approximate and subsequently rounded).


There does seem to have been a substantial acceleration in growth in brain volume approximately 300 thousand years ago.


Edit: Here's a link to a somewhat related article at Panda's Thumb from some years ago, based on a different paper. Much of the data is the same, but contains additional information.
Posted by Efrique at 12:54 PM 3 comments:

This Easter a bunch of god-botherers in Australia have decided they needed to get out all that angst and tizzy they built up while the Global Atheist Convention was in Melbourne. Besides, there was all that child-raping-coverup stuff they needed to distract people from, and blood-libelling the poor old Jews every time you have a bit of trouble is out of fashion now.

So the atheists have copped some of the vile crap we're used to seeing from the crazy christian rump. And tha Australian media have done their usual sterling job of reporting these things in a balanced, reasonable way (i.e. very badly indeed - that last was supposedly the "balancing" article describing the atheist response, but largely consists of far more theist quotes).

Yesterday I pointed out to my partner that as galling as it was, it was actually kind of good for us, because the more reasonable believers who have come to know a few atheists and discovered we just aren't the baby-eating nihilists we have been painted as will only be driven away even faster by this sort of rhetoric - it will hasten the demise of religion among the broader community, and become ever harder to claim any kind of moral authority when all that comes out of their mouths is hatred and lies.

If the Nielsen poll I pointed to late last year is accurate, and we combine with some information from the last census, the two largest religious denominations in Australia have recently become outnumbered by those that can't say they believe in god (20% and 26% for Anglicans and Catholics, compared with 30% who don't state a belief in god - and most of those - 24% are explicitly atheistic, choosing the option "don't believe in god".)

If anything, I expect these sort of attacks to become even more common for a while. And of course, the smaller the religions denominations become, the more radical the remainder must be, so I also expect it to get nastier.

Bruce at Thinker's Podium has a pretty good discussion and an interesting take from a somewhat similar perspective.

Barry Duke's article in the Freethinker is also worth looking at.

Happy Easter! Don't forget Jesus died so you could hate atheists!
Posted by Efrique at 8:18 PM No comments: