Are the religious more generous?

It is common to see figures or claims that suggest that religious believers are more generous in terms of donations to charity than the non-religious. (One thing that often concerned me about such figures is that they generally include donations made to their church, which even when limited to money used for actually charitable purposes often have an ulterior motive - proselytization.)

Today I saw a post in reddit's r/atheism that pointed to this information on Red Cross donations by country:

Curious about potential drivers of the figures, I decided to try to adjust for GDP, so I got the GDP (PPP) figures from here:

So I then divided the Red Cross donations by millions of dollars of GDP to give dollars donated per million dollars GDP, a kind of "generosity" measure in a rough sense (a better measure would reflect donations per "spare" dollar after basic needs). I discovered a down-trend of log-generosity against log-GDP (richer countries donate a somewhat smaller proportion on average). Wondering about other drivers, I then took the irreligion figures from here:

(specifically, the 2007-8 Gallup figures, which uses the very broad definition implied by the question "Is religion important?" - and I used those figures because they covered the most countries) and plotted log-generosity against the irreligion percentage figures, which give this plot: 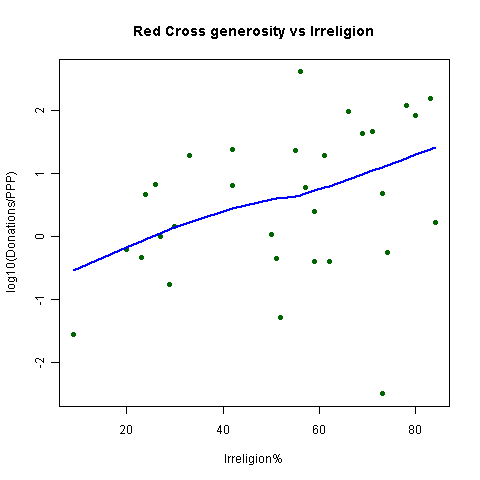 [The blue curve is a lowess smooth of the relationship, with f = 0.9]

But it certainly doesn't support the usual story - and if anything, suggests the opposite. There's at least some suggestion here that maybe it goes the other way.
Posted by Efrique at 1:20 PM 1 comment:

Daylight observations of Venus with the naked eye

Near the end of January, I happened to be up just a while before dawn and saw Venus in a clear eastern sky, a little below a crescent moon.

I had read that it was possible to see Venus in daylight, and a friend had photographed it in the western sky near sunset, so I figured that with the moon as a guide I should be able to work out where to look for it.

I went back to bed and then tried again around 9 am (AEST), at which time it was close to directly overhead, and with the aid of binoculars and the moon as a cue I located Venus with a few minutes looking. Given the location, I could make it out very easily with the naked eye. I checked again every hour and found it almost immediately. It was still perfectly visible at 1pm, with the sun blazing overhead and Venus well into the western sky.

Myth confirmed!
Posted by Efrique at 1:07 PM No comments:

I think Rule 34 may be wrong