Lower rates of religiosity associated with more trust of others

I tried posting about this ages ago, but Blogger clagged when I hit publish and everything I tried didn't fix the problem. Then I had some computer issues; eventually leading to a new machine. Finally Blogger seemed to wake up, so I decided I better try to reconstruct the post. So anyway, in honour of my third reddit birthday:

I saw some OECD figures on trust ("Percentage of people expressing a high level of trust in others") at the national level for 32 countries, and tracked them down to this page.
(The data come from two sources - the European Social Survey and the International Social Survey Programme.)


Specifically, at the bottom is a spreadsheet (CO1.XLS) that has some displays of the data, including plots looking at the relationship between Trust and two economic factors (median income, and income inequality). These are 2008 figures. I decided to throw Irreligion (specifically, the 2007-2008 Gallup figures there, which relate to the question "Is religion important in your daily life", and the Irreligion figures are the percentage responding negatively) into the mix and see how that related.

As it turns out, quite strongly: 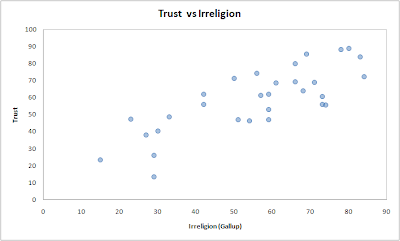 But of course, maybe that relationship is actually explained by those other variables the OECD identified, income and income inequality. Income is median household income (US$PPP). Income inequality is measured by Gini coefficient (low is more equal, high is more unequal). Let's look at those as well (Ignore the plot at the bottom right for now). The black numbers are linear correlation coefficients. 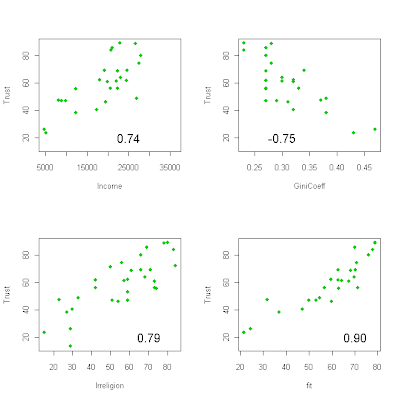 
All three veriables are strongly related to Trust. The plot against Gini Coefficient has a down slope (negative correlation) indicating trust goes down when incomes are less equal - not surprising.

So I decided to fit a model to see what the important drivers were. Are any of the variables still relevant after the other two have been included?

Though I would normally not assume a straight line, here the relationships are all so near to straight it's not worth trying to do something fancy, so I just fit a linear regression of Trust on the other three variables.

(Analysis, including plots performed in R.)

The main things to note is that all of the variables maintain the same sign of relationship when the other variables are included compared to looking at the relationship alone (this is not always the case - adjusting for other important variables can sometimes flip things around). After including the other variables, Trust still increases with Income and Irreligion, and still decreases with increasing Income Inequality.

The fourth plot above is of Trust against the fit from this model - it accounts for a lot of the variation in trust in other people across the countries involved.

However, as we see from the regression output, the Income Inequality (Gini Coeff) variable is no longer statistically significant - most of its relationship to Trust can be accounted for by the other variables. But Income and Irreligion are both still highly significant predictors of Trust.

That doesn't mean that having low levels of religious belief necessarily causes to more trust (it's probably that they both relate to other social factors, like social services, public health, support for the unemployed, crime rates and so on).

I nevertheless found the relationship much stronger than I would have anticipated.
I think that's very interesting.