That struck me as a pretty tricky thing to do, so I had a go at just making "Spaghetti Monster" just to see if it was possible. It's a quick and dirty attempt with no artistic merit, but I think it's adequate as a proof-of-concept that an ambigram something like what he wants should be quite doable in the hands of a more accomplished artist with the time to attempt it. 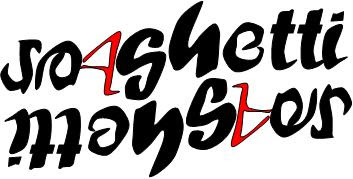 The Atheist "A" was just something I tossed in at the last moment (I noticed it on my blog as I was about to upload a first attempt and wondered if I could work it in. The answer was "yeah, sort of").
Posted by Efrique at 6:16 PM

nice, a little tweaking and this could "take off"

Just my type of thing. I love it.

Yeah, it definitely needs some tweaking before I'd want to use it for anything.

Thanks for the nice comments, everyone.

It's good though, and like you said, it proves it can be done. :)