One accusation I see against atheists come up a fair bit on reddit's r/atheism is that we're 'angry 13 year olds', that we're 'in a rebellious phase', that 'atheism is a passing fad'.

To this 48 year old homeowner with a family and a steady job, the 'rebellious' bit seems hilarious.

So let's compare the age distributions, shall we?

Some months later, redditor NukeThePope did a survey of r/atheism.

Both surveys asked about age and categorized it into broad age groups. Now these samples are self-selected, with the usual biases that implies - but both sets of biases would presumably be of similar size and direction on age, so they might still be reasonably comparable.

However, because the age groups don't correspond, I'm going to smooth both distributions - doing kernel density estimates of log(age) with the bandwidth set just above where binning artifacts start to appear - which is slightly different for the two, because they have different sets of binwidths - and then transforming back to the original scale (and don't forget the Jacobian, he whispers to himself!).

Here's how that comes out: 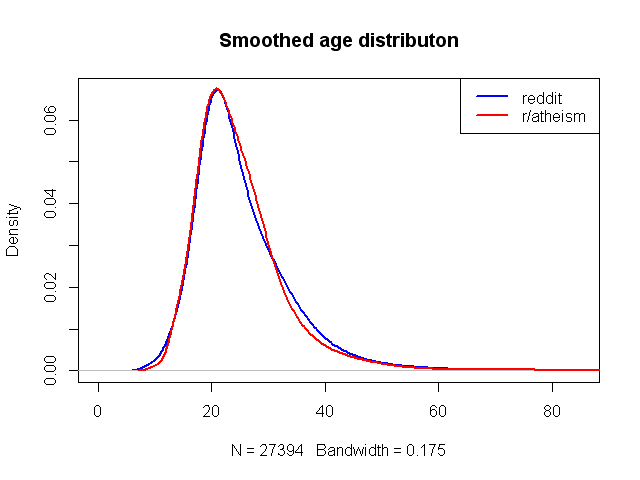 That is, around the upper quartile - well into adulthood - the atheists look to be perhaps a couple of years younger (I did some additional analysis to estimate the difference in that area) on average. Otherwise, there's really no clear difference.

So atheists - at least the denizens of r/atheism - aren't particularly different from everyone else; they seem to pretty much just reflect the demographics of reddit.
Posted by Efrique at 5:45 PM 2 comments: