100,000 atheists (well, mostly atheists) in one forum makes for quite a lot of links, posting and discussion
Posted by Efrique at 7:58 PM 3 comments:

Taking the newly released UN Human Development Index (HDI) figures from here, and percentage of unbelief figures from here (specifically, the Gallup figures), I decided to take a look at how they were related: 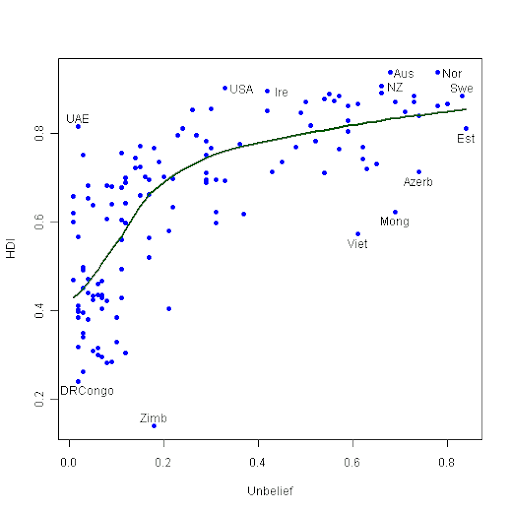 The green curve is a loess curve, which simply smooths the relationship to indicate the basic trend.

The fact that HDI increases with Unbelief percentage does not mean that greater unbelief necessarily causes greater HDI; the causality may run the other way, or both variables may be caused by some other variable, or there may be complicated feedback between the two variables, and probably several other causal factors (which is what I would imagine is the truth).

We have a budding mathematician

My daughter, who is in year three, was given the opportunity to enter the Australian Mathematics Competition (which presently has kids from over 40 countries competing in it).

Not everyone gets to enter; at her school it was only offered to the kids in the extension class.

She got a distinction, which places her in the top 15% of her division (the year 3 and 4 students that entered). Pretty good going, I thought.

Edit: Turns out she was in the top 6% among the entrants in the competition, for her year and the year above.

I believe I actually competed in an early incarnation of the same competition way back when I was a school kid, in around year 10 - probably the first year it was offered in NSW, when it was called the Wales awards. (Assuming it's the same competition; in any case I got $40 in an account from the Wales bank, now Westpac. For me at the time that was a lot of money and I used it carefully - I didn't actually finish spending it until I went to university, nearly two and a half years later. I don't know if they still offer any cash.)
Posted by Efrique at 5:19 PM No comments: