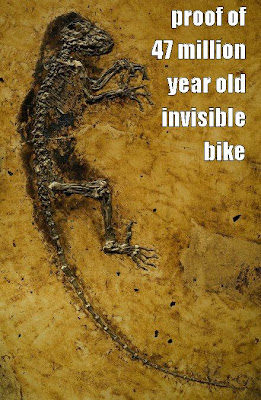 (Well, it seemed funny when the idea came to me. I haven't seen this anywhere, but no doubt it will have occurred to others also.)

Posted by Efrique at 2:36 PM No comments:

Creationism - a party of no Idas?

The media hype about Ida is wearing thin.

But by contrast Dana's post is a delightfully clear summary of the issues. Perhaps the most engaging one I have read.
Posted by Efrique at 12:49 PM No comments:

I recently saw a version of the Euthyphro dilemma that to me resonates better than the usual presentation. It's the same argument, but it fits better as a reply when theists do the old "can't be moral without God" dance.

In a comment by Ian Spedding at John Wilkins blog, he said:
"Ask them if they believe their chosen deity is a capricious being or one of reason and order. If the former, why follow a moral code that was thought up on a whim, if the latter, what is to prevent us from reasoning to the same conclusions all by ourselves."

I have a feeling it may be further teased along, but it's a good one as is.

(Some of the other discussion in that comment thread is also interesting.)

[edit: b0rken link fixx0red]
Posted by Efrique at 9:24 AM No comments:

If you instead agree that at least some things don't have a creator, then there is no need to posit a creator at all.
Posted by Efrique at 3:01 PM 2 comments:

I can happily have ice-cream without whining that I can't enjoy it because nobody promised I would get infinite cake after I finish.

The lack of infinite cake does not make the ice-cream worthless. Instead, undistracted by the imaginary need to gather cake-forks, I can focus on the very real ice-cream at hand, and enjoy it while it lasts. It's pretty good ice-cream.

Labels: allegorical answers to rhetorical questions, the cake is a lie

Worth a look, I think:

God delusions cloud a world of wonder
Posted by Efrique at 12:28 AM No comments:

Why 60 Dem senators is not all that filibuster-proof

There's a lot of noise about Arlen Spector's move to the Dems, which along with Al Franken (when he finally gets there, probably some time in 2011) makes for 60 democratic Senators.

But 60 democratic senators, while it sounds filibuster-proof, is nothing of the kind.

If the democrats try to rely on those 60 votes, where does the power lay? With the right-leaning democrats. It hands blue dogs the ability to bring on a Republican filibuster any time they have an issue that they want their own way on... and I don't imagine they won't use it a few times.

They can't do it *every* time, but that doesn't mean that they can't do it at all. If there's something they *really* want, you can bet that's a bargaining chip they know they hold. Even if they don't actually use it, the threat may be enough to get them what they want at the bargaining table.