a horde of troubles

Hoard vs Horde
Posted by Efrique at 12:42 PM No comments:

Got the first of a couple of papers with my student done in working paper form at last; it went up in the working paper series today.

It's a tremendous relief - it seemed to take forever.
Posted by Efrique at 4:33 PM No comments:

Web pages with "search" facilities that don't tell you whether the search is by phrase or by individual term... and whose "advanced search" doesn't either. If you're just using google's site search, fine, most of us are familiar enough with that to get how it works - but plenty of sites are using special search facilities.

C'mon guys, this is not something you leave out. It's not information you tuck 5 clicks away buried 8 screenfuls down some random help page. You put it right there, close to the search box. Even better is if you can offer ways to do both (such as "use quotes to search by phrase", which conveys in 6 words that (i) otherwise, you're searching for individual terms, and (ii) searching by phrase can be done in a natural way).
Posted by Efrique at 8:51 AM No comments:

On proper care and feeding of ideas

I'm writing several papers with an able student of mine (who is presently working as a research assistant with me).

We're working in a financially-related area. It's not the area my PhD is in - I'm a statistician, but one of my undergrad degrees was in this area, and the problems we're looking at are essentially forecasting-related and many of the published papers (at least the better ones) are at heart applied statistics, with a few twists that arise from the particular application.

One thing that has come up over and over again as we work is just how careless some of even the best-known work in this particular sub-area is. Many papers that pass peer review display a fundamental ignorance of the work that they themselves refer to (that is, they appear not to have actually read much of their references, and missed important information contained in them). Their algorithms have not been carefully checked, and fail to meet even fairly basic "reasonableness checks". They notice and then effectively ignore major clues about what's wrong (describing ways to avoid problems that should have acted as large flashing neon warning signs). They often make unsupported assertions that might seem plausible but which are in fact (if you check carefully) untrue. Even the better papers we're looking at contain many subtle errors.

It's a problem outside of the narrow area we're currently working in, and seems to infest a much broader swathe of literature.

Much of the best work is flawed and the more mediocre efforts are so laughable that I'd be unable to pass an undergrad for doing better work than they can get published. Some of these obviously ludicrous efforts win prizes.

When I act as a reviewer, I am frequently met with astonishment from editors at my thoroughness. I am in fact not a particularly thorough reviewer, but I do at least try to be somewhat familiar with the necessary background before trying to review work, I try to read the paper all the way through (and the substantive parts more than once) and as far as possible understand it and where feasible check what it says, make certain the arguments hang together and make sense. I do reasonableness checks where I can. That is, I do a fairly elementary level of checking that the work is not total garbage (less than with my own work).

The fact that even this fairly basic process can take me many weeks of solid work and result in a referees report longer than the original paper is not an indication that I'm obsessive, but it's an indication of just how careless most of the work in this (broader) area is.

And it's more general than that. I have helped people out in other areas (I could list something approaching a dozen, some widely divergent from the ones I've mostly worked in) where even the "classic" papers seem to be full of half-baked nonsense mingled with good ideas, joined up with death-defying leaps of logic and half-understood references.

I posted recently about how making mistakes is not necessarily a bad thing. The ability to make mistakes is an important part of getting things right. But you have to be willing to look for your errors and try to correct them. The error-filter can't be left out! And if you're writing supposedly academic papers, you should try to do it before they're published.
Posted by Efrique at 11:14 AM No comments:

The necessity of error and the error filter

Recently, two Scienceblogs bloggers have made substantive errors. (Well, no doubt more than two have, but I saw two.)

One is a mathematician and one is a biologist.

Now the fact that these writers made errors is of no great consequence. Every human, all of us, we all make mistakes. Everyone.

In fact, if some of us (well, okay, me) make lots and lots of mistakes. Actually, making mistakes is part of achieving anything at all, so we shouldn't fear making them (at least in situations where the consequences of error are not dire) - it means we're doing something.

What matters to me is not that they got something wrong, but how errors were dealt with. In both cases they made a post that pointed out they got it wrong, and that explained in detail what was correct.

A body of knowledge, whether it resides in an individual or in a culture, contains mistakes. Some of what we think is true is necessarily going to be false. If the fact that the corpus has errors in it is accepted, there is some hope of correcting some of the errors.

If you encounter someone who cannot be wrong, you may be sure they are in a sea of falsehood. It can be no other way.

However, we need more than just an acceptance of the possibility of falsehood and a willingness to change ideas. We can't just change our beliefs willy-nilly. The fact is, for most people, even the highly deluded among us, almost all of what we believe to be true is true, or close enough to true to be valuable (most of those truths are relatively mundane facts, it's what gets us through life). So we should need some further reason to change than the simple possibility we may be in error.

We need some way of identifying our most mistaken ideas and replacing them with better ones, without mistakenly replacing a good idea with a bad one. We need some kind of "filter" that allows us to see us to tell one from the other.

Some people use prayer to try to figure out what is right. The problem with that is it's mired in error. You can't tell for sure that what you think is divine guidance isn't just your own thoughts. In fact it's obvious this must be so, not least because two people can each be sure that they've received guidance about the right path, and those pieces of guidance are contradictory; since they can't both be right, at least one must be wrong. Whether you believe in God or not, the possibility that people can be mistaken in their interpretation of the result of a prayer for guidance should be obvious.

What is this magic knowledge-generating filter?

It's reason and evidence.

In order to raise ourselves out of the muck of ignorance, we need to admit the possibility of error, and use the only reasonably reliable filter available, in order to reduce those errors.
Posted by Efrique at 10:23 AM No comments: 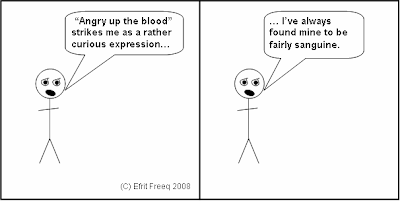 Posted by Efrique at 8:42 AM No comments:

{And here's Randall Munroe to help explain.}
Posted by Efrique at 4:26 PM 3 comments:

Another kind of load

The discussion of Noah's ark on Pharyngula brings to mind a topic that I have mused on before, but which people who know more biology than me might actually be able to take a stab at.

Just what would be the parasite load that all the people and animals on an ark would have to entertain? Some of the parasites that humans and our vertebrate and invertebrate kin are subject to are freaking nasty.

Would Noah's family have even been able to survive 7 months (or maybe 10 - the inspired word of god isn't sure on such things) with two of each kind of parasite (or was it seven) that couldn't be carried by their animals?. Or would they and the animals all be simultaneously blind, crippled, malnourished, crazy and dead?
___

"Conservatives trust the government with tanks and nuclear weapons but not to hand out cheese to poor people" - Jon Stewart to Mike Huckabee, on conservative "small government" hypocrisy
Posted by Efrique at 1:06 PM 1 comment:

According to Typealyzer, my blog is ISTP (Myers-Briggs Type Indicator).

Which means, among other things, that my blog enjoys driving race-cars, working as a firefighter, and thinking things over for itself. It is a master of responding to challenges that arise spontaneously (apparently, when Blogger goes down, my blog enjoys rolling up its sleeves and fixing it all by itself).

Apparently, it's considered unethical to compel taking the Myers-Briggs Type Indicator, so I shouldn't have entered my blog's URL in the address bar at Typealyzer without asking. But devil-may-care-racecar-driving heroic types like my blog probably don't worry about such things very much.


Of course, we INTJ's think Myers-Briggs is mostly a bunch of hooey, and when applied to a blog, probably more so.
Posted by Efrique at 5:20 PM 2 comments:

The tenants of ideology

Another pet hate... I have seen this one 6 or 7 times in the last few months.

"they took the basic tenants of evolution"

That's "tenets", dammit. Why has it suddenly become "tenants" all over the place?
Posted by Efrique at 4:22 PM 3 comments: