I did go to a particularly religious wedding on the weekend. Uh. May say more later.

In the past I've tried tracking my Erdős number through a particular coauthor that I think is likely to have the smallest number of all my coauthors. Today I tried doing it a different way, through someone else who I know well but don't have a direct publication with (who I just realized would have a low number)... and found a link to him.

But the question is, is the series of links I found legit?

Do coauthors of published books (which are not only citeable but cited) count as links toward Erdős number?

If so, mine is at most 5. If I look hard enough I can probably get it down to papers only, but if books count I don't need to spend the time looking. (Later edit: found a papers-only link that's of length 6. Considering its convolutedness I expect there's a shorter one to be found somewhere.)

Judging by the discussion later in the wikipedia article, the answer is that the book counts. So E ≤ 5.

One day I'm going to take some time and try to find a shorter link.
Posted by Efrique at 12:01 PM No comments:

One thing I have noticed in debating theists, particularly christians, is how often one will tell you they are a "former atheist".

If even half the Christians who paint themselves as "former atheists" had ever actually been recorded as such, atheism, instead of being the fastest growing (in raw numbers) "denomination" in the US, would be by far the fastest shrinking.

At a rough guess, I would say enough christians claim to be former atheists than would overwhelm the number of atheists in the 2008 ARIS survey by a factor of well over five. In the 2001 ARIS survey, the proportion of atheists was - get this - 0.4%; 4 in a thousand. Yet easily several percent of christians seem to proclaim "former atheism"?

What gives? Were they closet atheists?

Even stranger, this group of "former atheists" presents their "former atheism" in a light I have NEVER heard from actual atheists. They were, apparently, every kind of terrible thing that the less enlightened of the rabid rightwing fundies try to paint us as... and they are conveniently held up as experts on everything from science (especially evolution) to atheism to separation of church and state.

Now there are actually a few former atheists of now various theistic stripes whose former atheism was apparent to more than their later selves - so the phenomenon does occur.

But what about all these other ones that appear in debates, on message boards, on interviews, on youtube videos, as subjects of sermons, etc etc?

So where was this enormous group of thieving, drug-addicted, sexually deviant, but all-of-a-sudden-completely open to the message of christianity experts-on-every-subject hiding?

Why weren't they showing up in religious surveys?

Were they all hiding in one large (and presumably unbearably hip) basement?

Or, as seems much more likely, are they largely exaggerators-for-Jesus?
Posted by Efrique at 4:13 PM No comments:

The Chaser and right-wing censorship

"The Chaser's War on Everything" is a satirical TV show in Australia. (The Chaser itself was a satirical newspaper - the nearest US equivalent I can think of would be The Onion). The Chaser's TV show (which is on ABC-TV - owned by the Australian Broadcasting Corporation, a public-owned broadcaster) has been through various incarnations, but relies mainly on satirical sketch comedy and various other bits.

The Chaser boys regularly go over the top - some of their skits can be challenging to watch. And they don't always hit the mark - sometimes they're just not funny. None of that matters, except to their ratings.

They regularly offend the right wing, and talk radio goes completely berserk - the last time they went off quite this much was when they did a less-than-kind (but not completely inaccurate) song about people who had died. This time it was for a thing they did about the Make-a-wish foundation (a charity for sick children) - so you can imagine the furore from the "won't someone think of the children!" brigade. In both the earlier case and the current one, I actually watched the piece that caused all the fuss when it went to air - and in both cases the reaction was so over the top as to be pathetic.

Look, it's simple. If you find these guys offensive, don't bloody watch them, okay?

If they break the law - well, that's what police are for. If they break guidelines for broadcast material, there are regulations and penalties in place there too. If they contravene ABC's own internal procedures, there are penalties there as well. None of that happened. There may be a question of whether the internal review was sufficient, but that's an internal matter for the ABC. To take them off the air for two weeks to pacify the right wing - when they followed ABC procedure (the piece was reviewed and approved) - was ludicrous.

The weird thing is, it was relatively speaking, the cases that the right wing decide to go nuts over are not extreme compared to other stuff that they do. It's generally no worse in offense terms than South Park or Drawn Together (except it's live, rather than animated).

Occasionally, *I* find something they've done offensive. That's not bad, it's valuable. We need our comfortable middle-class existence shaken up a bit. Nobody and nothing should be above ridicule, and it can be very valuable to step back from yourself and try to examine why you find something offensive.

If a parent of a dying child watched the piece and was offended (and I can certaonly imagine some would), *that* parent has every right to take it up with the ABC. But all the people screaming about the possibility that someone might be offended? You offend me. Get a fucking life.

The ABC is moving to curtail the way satirical programming is reviewed - which means less satire. That's a terrible loss to our society.

You have a right to find things offensive. There is, however, no right to never be offended - and there should not be.
Posted by Efrique at 11:03 AM No comments:

The thing that stood out was the countries with the low scores ("most peaceful"). They're countries well-known for low levels of religious belief. So I thought I'd try to get some data. I grabbed numbers on "no religion" from wikipedia, and looked at the relationship. There were a lot of countries really squashed up at the low end of non-religous percentage (left side), so I did a transform. Unfortunately a large proportion of "0% atheist" countries make a log-transform impossible - so I did a cube-root instead. 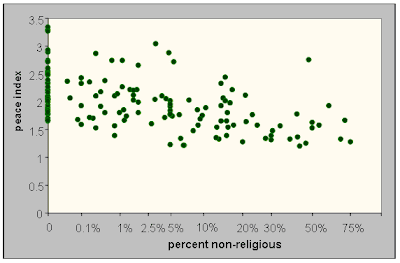 
Issues:
- "wealth" will be a confounding variable (poorer countries will on average be less peaceful and more religious)
- a few of the non-religious percentage figures are a bit rubbery, and my treatment of ranges (taking the upper end) less than ideal.

I'd like to improve this plot by getting other/better figures (e.g. I'd also like to try some of these), giving ranges where ranges were given and giving less weighting by the width of the range (make them smaller or paler or something, if the figures are really uncertain). I'd like to use other figures, and see what adjusting for wealth (say GNP per capita or somesuch) does. Just looking at some of the wealthy "western" countries, it looks like the effect remains, but would be weaker.