Atheists are often accused of being "angry" or "militant".

To be honest, I don't think they're either.

There are two related things that may give some people that impression.

(i) some believers take straightforward, open, doubt and direct requests for evidence as an attack. As a direct and personal attack. But it's actually no different from skepticism in any other field, but if you choose to see it as an attack, the people involved are obviously going to seem belligerent. Religious belief is used to, and expects to receive, a special place among beliefs. Atheists aren't always keen on giving it that, because they don't see that special reverence as having been earned. If you want an atheist to show religious belief more respect than say belief in astrology, they're obviously going to expect stronger evidence than there is for astrology.

Further, people who are openly atheist tend to hear the same circular arguments and faulty reasoning over and over, so they don't necessarily have a lot of patience with having to deal with it yet again. Some atheists certainly are impatient with poor argument. Some won't revere your beliefs just because you believe them. Even though you might find it shocking to have your beliefs fail to get automatic respect, and even more, have arguments you've never seen challenged before impatiently attacked for being transparently weak, that doesn't make atheists automatically angry or militant. That's a mistaken perception. Get over it.

(ii) Some things do make atheists angry. We sometimes get attacked. Screamed at, insulted, and worse. I've felt in danger of my life on at least one occasion. Fundameltalists (that was a typo, but it's such a good one I'm going to leave it in and claim it as a neologism) in particular seem to see the mere existence of an atheist as a call to crusade, and many of us have been on the other end of a fundy rant. Also, certain people have some sort of compulsion about telling us what we're really thinking. People who have never met you can somehow divine your innermost thoughts, thoughts that you somehow never realised you were having. They're either really amazing or totally deluded.

[My - also atheist - partner of around 25 years shares a lot of my likes and dislikes - to the extent that if she is say choosing a design for our new bathroom, she will reliably choose one that would have been either my first or second choice as well. When we were trying to choose names for our children (in both cases during pregnancy), we generated separate lists that we then brought together to discuss - and those lists overlapped. A lot. We studied the same stuff at university (we both started in the same area and both ended up the same other area, but neither at the same time). She understands me perhaps as well as anyone ever will, but still still often gets it wrong when she thinks she knows what I'm thinking. But some idiot from half a world away just knows what I'm secretly thinking, and insists on telling me at length. Needless to say, they're clueless, wrong, and it's insulting. Gee, how could that make me angry?]

Aside from that kind of stuff, atheists seem to me to be no more or less angry than anyone else in the normal course of events. Some are calm, some are not so calm, just like anyone else. If you don't jump down an atheist's throat the moment you hear of their lack of belief, you might even find a polite one.

Atheists are far from militant. Are they torching churches or throwing rocks through windows? Punching out people carrying bibles? Don't make me laugh. Are they marching in the street? Are they burning bibles? That's being militant. They don't even go around door-knocking for atheism, like many theists do. What have atheists done? They've published a handful of books. They've gone on a few TV and radio shows, written a few articles. Participated in the odd debate. Written some blog posts.

That is, a few atheists are no longer silent. That's what's happened. They're not shutting up. If a handful of atheists willing to say what they think and why is upsetting, I don't think that's really their problem. If you think that makes atheists seem scary and angry, you should examine why you're having that reaction.

Richard Dawkins (for example) is sometimes accused of being cranky. He isn't. When treated reasonably, from everything I've seen, he's a remarkably polite and quietly-spoken man. As described above, his lack of fawning respect for religious belief can make some people think he sounds cranky, and some people's actions can certainly make him angry. That's not the same thing at all. Give the poor guy a break! 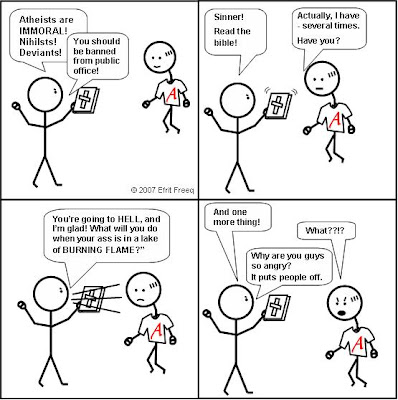 Nice one.
Surely there is good reason to be angry when you think about the grip religion has on people and states.

My main interest in that post was in exploring why it may be that atheists are so often perceived as being angry in situations where they clearly aren't.