Non-religious (civil) weddings in Australia have boomed over the last decade.

See this "Civil weddings now double the number of religious" media release (pdf) by the New South Wales government, and this newspaper article on the corresponding figures in Victoria (which together account for 60% of Australia's population).

So I made a graph. It shows the percentage of weddings that were civil ceremonies by year for the two states (with the corresponding remainder - the religious weddings - percentage shown over on the axis on the right). 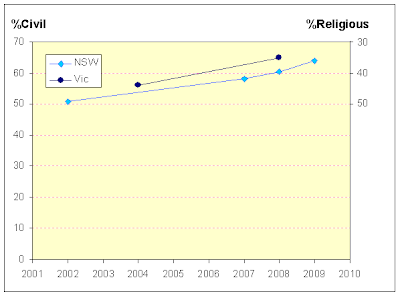 By 2002 religious weddings were already in a minority... and presently they're outnumbered about two-to-one. If anything, from the NSW figures, the trend is accelerating.

Of course, lots and lots of people just aren't getting married at all. They're not in these figures, and they're growing too.

You do not give any reason why you think this trending is accelerating. Is it because people are getting less religious?

I have no solid facts on exactly why it is happening.

The obvious conclusion is that people are less religious.